Your life is not complete without a KONSTRAKTA BATHMAT!

What can I say?

Conchita Version II…which version do you like the best?

My latest artwork. Conchita Version 1…what do you think?

Who IS this intriguing couple? And what’s with the weirdy creatures bottom left? Anyone know? I wanted beautiful with a hint of evil…

Australia…well, my interpretation! What do you think?

Been busy on Redbubble, Society6 but not so much here!

Hope my tribute to Russia 2020 is psychedelic enough for you.

In 2020, I developed a new system of awarding points: the Verkas. Maybe I should patent it…

One VERKA means there’s very little that grabs my attention but there’s something. Maybe it’s a terrible song but he’s wearing a nice hat. Or it’s a catchy chorus and that’s it.

Two VERKAS means that I might listen to it more than once.

Three VERKAS means a good song. If it’s a power ballad, it’s sincere and the lyrics are not complete rubbish. If it’s pop, it’s tight, original and instantly memorable.

Four VERKAS? Now we’re talking. This is a quality performance. The singer can sing. The staging is creative. It might even show tell-tale signs of originality.

Five VERKAS means an excellent performance. The moment it begins I am hooked. It’s something special. It might be mesmerising or dramatic. Or it might be hilarious. It’s an instant gut reaction: I will love this song forever. And five VERKAS means I will share the Youtube link because it deserves to be seen.

A simple system.  But as you know there are some dreadful Eurovision performances out there. Unfortunately on occasion I must award less than a VERKA but I try not to be cruel. There are bad years when I award NO VERKAS to multiple performers…hello, 2019. But then, there are years when there’s an abundance of VERKAS…like the fabulous 2007. Every so often I award a half VERKA:

I do have an eighth of a VERKA up my sleeve but I’m not sure that I’ve had to use it yet:

Verka is starting to look like a slice of pizza so I’ll end here.

Do you know? Were you there? Can you explain? As Moldova sang in 2011: ‘There is a my-ster-y…’. Although they were singing about something else. But this is Eurovision. You can sing about anything. As long as it’s love, not enough love, too much love, world peace or werewolves. Here are some of the great mysteries of Eurovision: 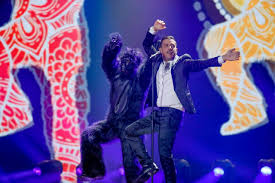 EUROVISION 2015
If we ‘say goodbye to yesterday’ and don’t want tomorrow because ‘tonight’s so good’, what happens to today?

MACEDONIA 2015
Man in trench coat, 3 funky bad dudes and ancient ruins. Throw in some autumn leaves and you have – ?

SEBALTER SWITZERLAND 2014
All about whistling. How does one whistle with confidence in front of 200 million people?

Same question. How do 3 back up singers whistle  with confidence in front of 200 million people? AND they stamped their feet. Genius co-ordination.

THE OLSEN BROTHERS 2000
Anyone?

BELARUS 2009 PETR ELFIMOV
How could this demi-god not make it through to the final? Europe, what is wrong with you? What was wrong with you?  Think back to Moscow, 12 May 2009…what happened that night??

NORWAY 2002 HALDOR LÆGREID
A power ballad and what a voice. That high note. The length. The vocal control. Why did he score so unimpressively? Guess it’s not cheery enough. Let them laugh, Haldor. You were outstanding.

ANDORRA ANYTIME
Where did you go? I want you back. You absolutely nail classic pop.

ICELAND 2013
Who creates the backdrops for Iceland? From Yohanna through to Pollapönk? Eyþór Ingi’s Ég á líf was heartwrenchingly beautiful. Creative genius. Works of art. Thank you. Takk.