THE YEAR OF ‘THE CASUAL LOOK’

THE YEAR OF BLACK CAMIS & PURPLE SATIN FLARES (but not together…)

Those wacky Olsen Brothers start the show. Can someone explain please? Crowd goes wild when Natasja and Soren stroll on stage: ‘Good evening, Europe’. They decide to spend the evening speaking in rhyme. Yes, the whole evening. After minimal banter, off we go….

1. NETHERLANDS. Michelle. Out on my own

3 girls sitting on the floor. Now she’s stretched out. Now the back-up singers – wearing noteworthy flares in two different shades of purple – have got up. She’s getting up too! Look at her rise up! She’s never felt so free…

It’s Kieren Perkins! Looking like a dentist!  Two frenetic dancing girls – why? Love this song not what they did with it. But it is a song contest, right? I’ll bet Azerbaijan studied this to get inspiration for their black/white debut extravaganza Day After Day.

I listened to this year before watching it so was quite surprised to find a cool dude fitted out with orange overalls singing – well, similar to overalls. 4/4 time but it feels much more complex than that. Performed in Bosnian and English…fantastic song.

Carefully chosen casual yet classy white/neutral clothes. Like it. Pianist in orange and Brilliant vocal work. Amazing  ‘On my owwwwwwwwwwn!’ build-up to final lingering note. Love it!

This must be a good year. I have never given out so many Verkas in a row….

What can I say? Love this.  Sounds circa early 1980’s Australia. Catchy and compelling. Lead singer Ilya Lagutenko is a mix of unhinged madness, fascination and raw talent. Reminds me of David McComb, Iggy Pop and that guy from Latvia who came third in Eurovision 2000…Renārs Kaupers! (Had to look that one up.) Keyboard player spins around à la Cyril in Father Ted’s Song for Europe.  Brilliant!

7.SWEDEN. Friends. Listen to your heartbeat

Comparisons are odious – but hey! – this is raunchy red leather ABBA. And we even get a wink from Frida-clone. A piece of perfect pop.

8. LITHUANIA. Skamp. You got style

9. LATVIA. Arnis Mednis. Too Much.

An energetic Elton John as lead singer!  And a piano accordionist is always a good addition, don’t you think? Live version much more amusing than CD. But nah, doesn’t cut it.

10. CROATIA. Vanna. Strings of my heart.

Middle of the road.

Peachy gold outfit. 2 dudes in black, one in a beanie suddenly appear…where did he come from? Pan pipes are always a worry.

No Verkas for you, Croatia.

Middle of the road.

White guy in black. Black guy in white.  3 black and white back-up singers. And we get a wink in the second verse. To my surprise, gets great audience response

No VERKAS this year for Portugal.

12. IRELAND. Gary O’Shaughnessy. Without Your Love.

Ireland does it again. They are so good at this…

NO VERKAS for Ireland this year.

At last!  Let’s dance! Lot of red. Black clad singer with 2 gals in gold + 3 other black clad back-up singers dancing their hearts away. Does that do it justice? Energetic.

Solo chanteuse in red dress. Beautiful. And she switches to English: I am what I am. But she won’t win. Because no one votes for France.

Young bloke in white suit against hot pink background.  Classical accompanists. He can sing! Did he lead the way for France’s youngest tenor, the gorgeous Amaury Vassili in Eurovision 2011? And a key change too. Magnifique.

No VERKAS for you, UK. But you’re used to it.

Black + yellow tight leather outfit. Give her a point for making an effort and a bit of originality. 2 dudes in crimson dance on and lift her up as a crucifix. They’re gone. Wait! They’re back…but dancing with each other not her.

Not a good name for a song. Back-up singers are quite a sight. Not in a good way. Their crazy dance moves don’t quite make it. Dude in hairy baby pink coat rocks on –  love it! He whips it off. No! A black t-shirt! Unforgettable. No points for costume change. But give him a point for a key change. And a Verka for the coat:

19. GERMANY. Michelle. To Live for love.

Middle of the road

Blonde with nice hairdo in pink evening gown. Trying hard to be statuesque – even has a crucifix shadow projected behind her but probably a mistake. Piercing voice. Very piercing.

NO Verkas for Germany, as usual.

Not my kind of song. Goes along at same level for 3 minutes. Wish they had beefed up the final chorus. But they didn’t. Still Dave and Tanel have good rapport, Tanel has a fantastic soul voice and the back-up boys are suitable excitable and throw in a few cartwheels and handstands.  Much better live than on CD.

Emotion-free female singer in white – someone give the girl a chocolate croissant.  She turns around in final chorus, swaying, to reveal naked back. Key change. Audience loves it.

RUSSIA  MUMIY TROLL. LADY ALPINE BLUE
Love it! Just like early 80’s Oz rock. So, given it’s 2001 in post-communist Russia, they are…AHEAD OF THEIR TIME! Such cool dudes. And so cheeky. ‘Just keep on smiling…‘ The audience is confused. Love it! 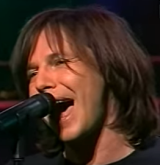 This was the first year I heard the songs before I saw them performed. Wot a difference it makes. Hearing Nino Pršeš sing Hano and then seeing him is quite a surprise.  I visualised a slick-looking young man in a grey suit and got a guy in Guantanamo Bay-style overalls with a beret. But hey, this song is a work of art. He wrote it, he sang it, all credit to him. 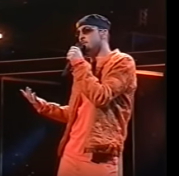 ICELAND  TWO TRICKY. ANGEL.
In a bit of a spin because I heard the CD before seeing the performance. Those black-clad dancers are very, er, frenetic. Probably needed some physiotherapy after spending 3 minutes waving their angel wings (aka arms) around. But such a happy song. Full marks for energy.

The Orin Scrivello Memorial Trust Me, I’m a Dentist Award goes to: Young Kristján from Iceland. 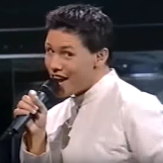 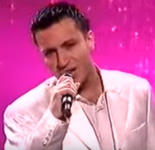 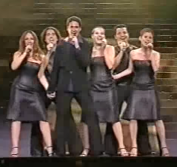 NORWAY. HALDOR LAEGREID. ON MY OWN.
Well, pretty much on his own except for 4 back-up singers + pianist. Amazing voice. Amazing vocal control. Just watch him hit those high notes. Pure passion. And a key change. Fabulous. 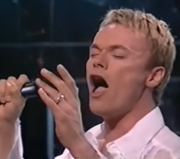