THE YEAR OF ACROBATICS

THE YEAR OF ‘LETS HAVE SOME GIANT-SIZED IMAGES OF ME’

THE YEAR OF ‘HEY, WHAT ABOUT A BACKDROP OF ME?’

2. ISRAEL.  Noa and Mira Awad. There must be another way.

Superb. What style, what class, what elegance! I’m sure Barbara from 2021 will be giving a nod to Patricia.

Charming man with 5 floaty females in black, a blonde in white who suddenly appears (wow! didn’t see that coming!) and a wind machine. Wind machines can play havoc with beautifully styled long hair, you know.  Choreographed to look like they are dancing in slo-mo. Drapey black fabric wafts around a lot.  One Verka for staying true to their musical roots? Nah…

What’s the vibe? Flower power graphics,  folk costumes and a retired rugby player on ukelele. A stage full of smiling people and piano accordians, maraccas, bongos, you name it.  Fails to grab me. Sorry, Portugal.

Very pretty. An ocean of blue Clouds, snow and leaping dolphins right on cue. Plus bonus cellist looking mournful and in the moment.

Wow. A conveyor belt, magnetic shoes and a giant stapler. Full of energy and very impressive leaps while singing…Stamina Supreme Sakis they call him. ..and is he bursting out of that white shirt or what? Watch out for the wacky special effect when they all lean forward and don’t fall flat on their faces!

Love this. Fabulous-looking ladies give it all they’ve got and it is brilliant. Fierce and ferocious. But also catchy, energetic, full of life…we are dancing nor par!

Love this. Woman in agony ages before our eyes on giant screens. Much better than that sounds. Emotional, heartfelt and simply compelling.

Back up singers straight out of Cabaret (an interesting choice), a bit of traditional Azer-ukelele from man (think it’s a TAR), and some bike stands at the  back. Can’t quite get this one. Not once when she sings ‘Always on my mind’ does she look at him! Chemistry between them: zero points. Azerbaijan overwhelmingly bring quality stuff every year, but, well…

A work of art. Militaristic, stark, white. Every scene a tableau. Go ye workers, rise up, and stand in the wind! Davor Ebner is extraordinary: so focussed and powerful, no playing to camera. Outstanding.

One of the happiest songs  of any Eurovision ever. And one of my favs. Love her to pieces: lime green dress, purple flowers and knee high killer purple boots. And those dancing boys so absolutely loving every minute of it. They leap in the air and land on their knees…did you see that?! So full of love and joy and exuberance.  Can’t believe they didn’t come Top Ten.  5 stars from me.  Try watching without tapping your feet.

Nice  performance. But not my thing. And an unnecessary wink…zero Verkas….well, half a Verka then!

Love this. Two cellos and violins. Beautiful and different which is challenging to do in Eurovision.

Pop with a little bit of country.

Not so sure about you. Seem kind of insincere in your urban cowboy vest get up. And song isn’t immediately memorable. But very nice white teeth. Yikes.

Whoa. Those sparkly silver skintight pants deserve a special mention. And he can almost tap dance. And the appearance of the aesthetically astounding Ms Dita Von Teese is a surprise. Another vaguely Cabaret themed song like Azerbaijan. Mystifying.

Ummm. I think of Farrah Fawcett-Majors and Susan Sarandon. It must be very tricky to sing and belly dance simultaneously.  Haven’t tried it myself. So a Verka for agility. Nah, half a Verka. Nah, no Verka. But song and vocals are not exciting. And can someone tell the guy in jeans that he’s in the wrong song? Thanks. Oh, yes, a sexy dude in olive green arrives too late. And more acrobatics….

19. ALBANIA. Kejsi Tola. Carry me in your dreams.

…and more acrobatics. Turquoise masked man steals the show! Please come again next year, you tease! Don’t get the concept for this song at all but, hey, does it really matter? Why two man in black with face paint? A tribute to Marcel Marceau? Or the Joker? Sometimes less is more.  Half a Verka for the creative staging and costumes and half a Verka for the magnificent turquoise man and his sequins which adds up to one Verka. But the more you watch this, the more hilarious it is. Maybe it will become one of my all time favs like Petr E (see below). But not quite yet.

Yet more acrobatics. Why exactly? Not sure. What is it about this song that propelled it into Number One position? What genre is it? What demographic of listeners does it appeal to? If anyone can answer these questions, I would be grateful because I don’t get  the violin and I don’t get it in general. Maybe you have to be Norwegian?!

Wow. Conceptually…huh? A rotating hamster wheel. Rotating horizontally not vertically. Roman gladiators and the expected acrobatics…isn’t that what Roman gladiators were renowned for? She spins 360 degrees. Oh dear. No comment. Give them a Verka.

Forest nymphs. Cherry blossom backdrop.  A bit of random traditional dancing. I don’t believe it for a second!

4 men in tuxes with violins. A smoke machine. Andrew Lloyd-Webber pretending to play the piano. Could I say it’s schmaltzy?!

She’s singing in English in the chorus! Is that allowed?! Very carefully choreographed but no real spontaneity. Wait…a few random acrobatic moves from the men.  And then an incredible (not) disappearing act involving lead singer and an orange scarf. Hmmm. 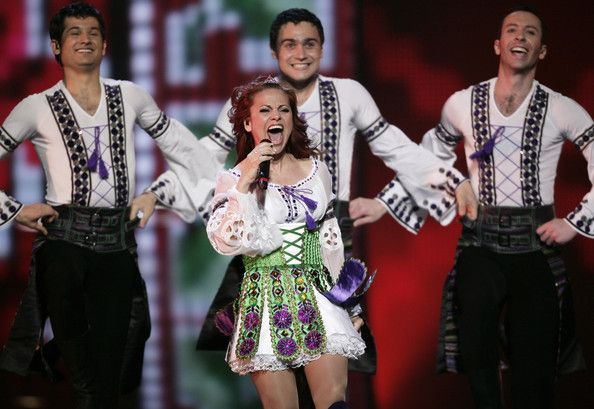 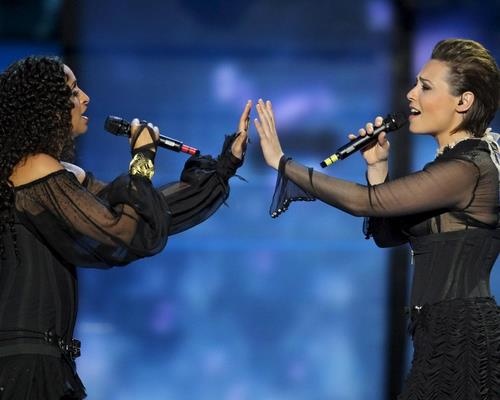 AWARD FOR BEING RIPPED OFF IN SEMI-FINAL 1

BELARUS. Peter Elimov. Eyes that Never Lie.
Lime green lights! Sexy white outfit! Woman writhing in semi-transparent sheet! PLUS added bonus of  lingering final shot of his HAND.  Petr, lead guitarist and bass player. Brilliant. This is quintessential Eurovision. How dare it not make it through. This is an OUTRAGE!

AWARD FOR BEING RIPPED OFF IN SEMI-FINAL 1 (2)

AWARD FOR BEING RIPPED OFF IN SEMI-FINAL 1 (3)

SWITZERLAND. The Lovebugs. The Highest Height.

Fantastic pop song. What was this audience thinking?

GETTING A BIT TEDIOUS BUT…

Don’t think I’ve ever put up an Irish song for consideration… this is classic pop in the style of Georgia this year. Should have got through. Boo to the voters!

Extraordinary. So underated. Can’t believe this didn’t make it through. Shame, votes, shame!